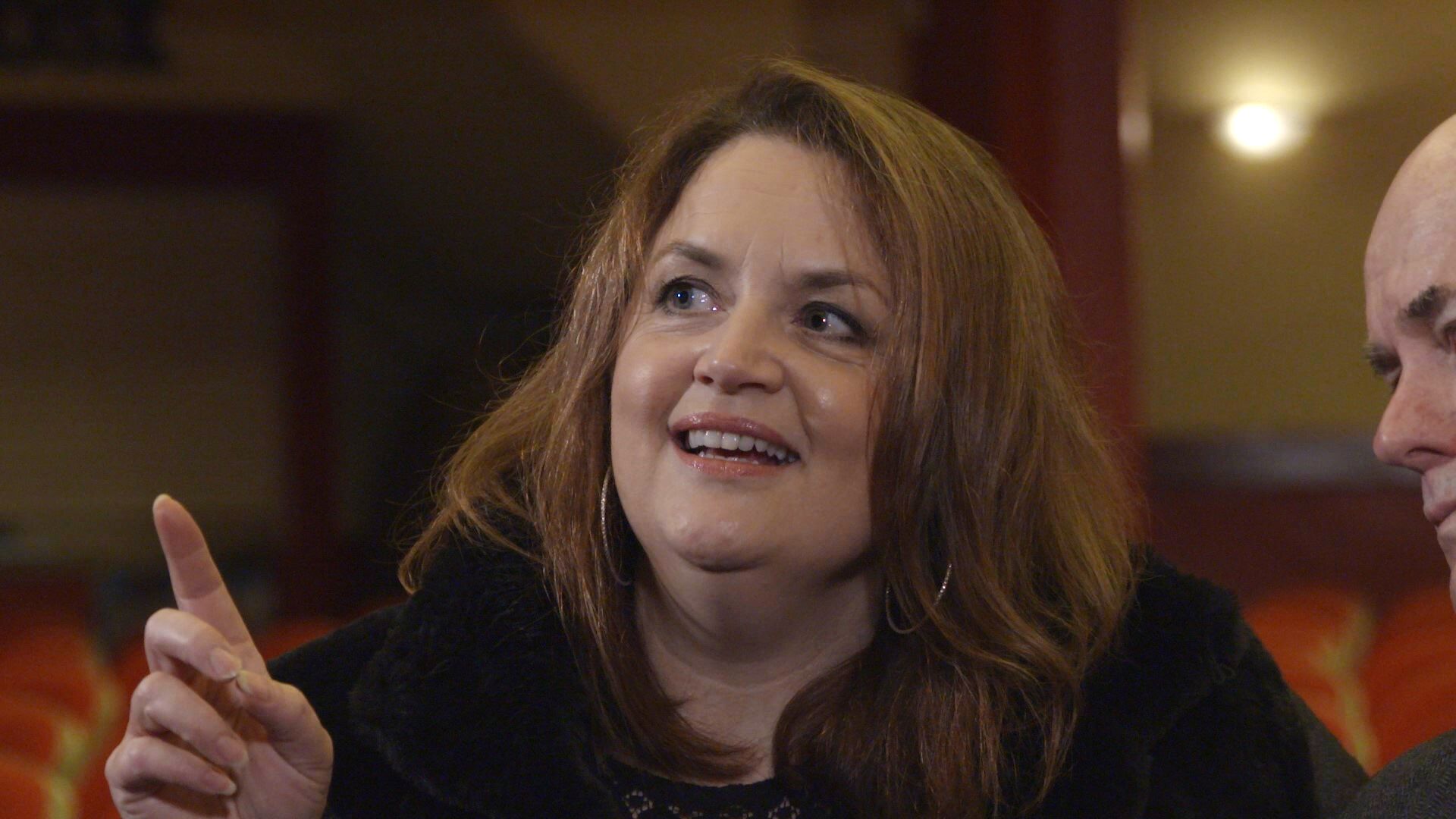 As part of a brand news series 'Iaith ar Daith', which starts on S4C on Sunday 19 April at 8pm,  Ruth Jones is one of five celebrities who will be taking to the road with a famous Welsh-speaking mentor in a bid to learn Welsh, or in Ruth’s case, improve upon her spoken Welsh. Let's find out a bit more about her.

Where are you from – tell us a bit about your background

Dw i’n dod o Borthcawl – es i i Ysgol Gyfun Porthcawl a wedyn i Brifysgol Warwick ble nes i ddysgu drama. I am one of four children, my mother was a doctor and my father a solicitor. Neither of my parents spoke Welsh, apart from the odd word here and there, and Welsh hymns!

There wasn’t really a decision as such. I've been trying to keep learning it ever since school but in quite an unofficial way. My step-children all went to Welsh language schools, and a lot of my friends are Welsh speaking. There's something sad about being Welsh and not being able to speak it. My sister told me about Say Something In Welsh and I wasn’t sure if it would be my cup of tea. But I gave it a try and absolutely loved it. I think SSIW is such a brilliant teaching system. I recommend it to everyone!

How did you find learning Welsh?

It’s been a very enriching exprience, and I hope an ongoing one. I love now that I can listen to Radio Cymru and although I don’t understand every word, I understand a lot. And the music on there is fantastic – so that’s been a bonus in learning Welsh, I’ve discovered all this gorgeous Welsh language music too.

What was the best thing about your ‘Iaith ar Daith’ challenge?

It was one of the best work experiences I've ever had. It was such good fun, the week was full of surprises, the crew were exceptional, and I learned so much Welsh. I’m not sure there was a favourite challenge – I enjoyed them all! The sheep mart, making up a song with Gillian Elisa in order to learn how to say Mwyngloddiau Aur Dolau Cothi (which I still have to sing to remember!), and of course being on Pobol y Cwm (Ruth’s challenge on the show) which was terrifying but so rewarding, I’m so glad I did it.

There are so many that I love... spigoglys (spinach), datrys (to solve) and gwerthfawrogi (to appreciate) which I learned when I did my scene in Pobol y Cwm. I do love lots of Welsh phrases too, especially the ones I’ve learned from Say Something in Welsh – e.g. bach yn arafach (a little slower) and ambyti mis (about a month) and llond llaw go iawn (a real handful).

What’s your advice for Welsh learners or people thinking about learning Welsh?

The important thing is to keep trying to speak with Welsh speakers, which I really do make the effort to do. It's a strange thing though with language, because I think we stick to speaking in the language we've always spoken to people in. So there's a big shift to make when I try talking to Welsh speaking friends who have hitherto only spoken in English to me. But yes, keep trying to speak it whenever the chance arises, watch Welsh language tv, listen to Welsh language radio and just immerse yourself in this beautiful, beautiful language.

What do you enjoy doing in your spare time?
I love reading – I consume books! I’ve also started playing the piano again recently after a 35 year gap.