The asylum seekers and refugees learning Welsh in Newport 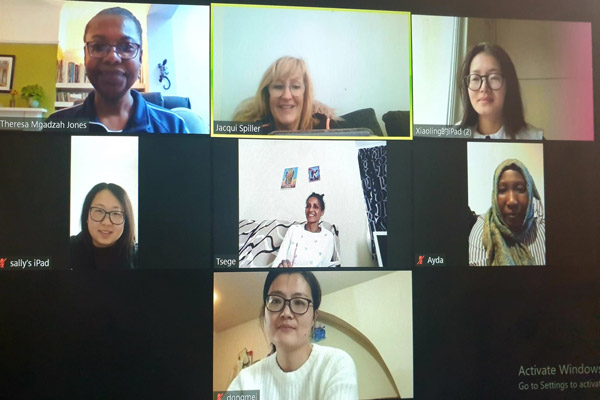 Asylum seekers and refugees living in Newport are enjoying learning Welsh, thanks to a partnership between the British Red Cross and Learn Welsh Gwent, run by Coleg Gwent on behalf of the National Centre for Learning Welsh.

The students, who are all women, come from different countries including China, Sudan and Eritrea.  They’re following a free Welsh course for beginners, led by tutor Jaquie Spiller, which was held face-to-face before the pandemic, but is now held online in a virtual classroom.

Many of the students already speak two or more languages.  Most are also mothers and are keen to use their new Welsh skills with their children, who are also learning Welsh at school.

“When the Home Office accommodates people here, very little information is given about Wales being a different country. People think it’s England and aren’t aware there’s a different culture and language.

“Then when people have been here for a while, they start noticing road and other public signs, and realise there is another language. Their children will also learn Welsh phrases and nursery rhymes.

“So we started the lessons with Learn Welsh Gwent because parents were inquisitive and wanted to know more about the language.”

Moving lessons to a virtual classroom during the pandemic was a challenge as only a few students had laptops and access to Wi-Fi.  However, the Red Cross secured funding to buy laptops for some of the women and ensure there was Wi-Fi in the Home Office houses, and six students have carried on learning Welsh.

Theresa adds: “These women want to learn Welsh because they feel that when you move to a new country, you should learn the language of that country.  They want to help their children with their homework, but more importantly, they recognise the benefits of being multilingual.  They know that if they or their children also learn Welsh, as well as English, this will open more doors for them when they look for employment.”

The National Centre for Learning Welsh has also created a 10-week ‘taster’ course for refugees and asylum seekers for when they first arrive in Wales, which introduces both Welsh culture and everyday words and phrases.

“It’s a fantastic course,” says Teresa, “which can be used side-by-side with the ESOL (English) course. The pictures, illustrations, food and countries mentioned in the course are reflective of the countries the women are from and the diverse communities in Wales.

“It’s nice for the women we support to see things that are familiar to them, and non-white faces. It has certainly been very useful to us.”

“Creating opportunities for people from all backgrounds to enjoy learning Welsh is a key priority at the National Centre, and we’re delighted to be working with the Red Cross, and our course provider, Learn Welsh Gwent, to enable these students to learn Welsh.

“We have a range of other Welsh courses available, including courses for parents, lessons in the workplace, virtual classrooms and independent online study.  New courses for beginners are starting in January and we’re looking forward to welcoming learners to our supportive and friendly community.”

Theresa is originally from Zimbabwe and moved to London when she was 12 years old as the war for independence was breaking out. She now lives in Cardiff with her husband, who is a Welsh speaker, and their three children.

She said, “My children are mixed race and have attended Welsh-medium schools. I’ve learnt some Welsh, but as a black woman, I’m very self-conscious when I go to Welsh classes as I don’t see many black people learning Welsh.

“I have always felt that we are at a disadvantage. It’s not only refugees who aren’t aware of the language, but the wider BAME community that has been here for a long time too.

“They seem to have the impression that Welsh ‘is a language for white people’, which is certainly not true.  This is something that needs to change and is another reason why we’re introducing the language to the women we support here in Newport.”

Note to the editor

A range of new Welsh courses for beginners are starting in January – for more information and to book a place - https://learnwelsh.cymru