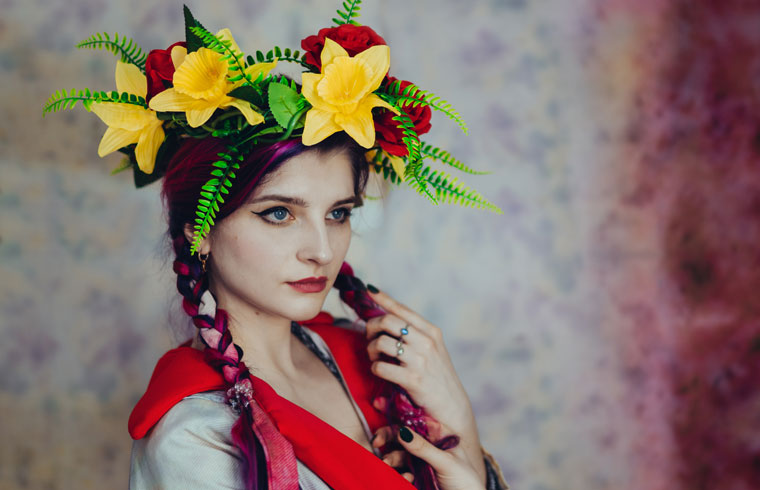 A Polish student who fell in love with Welsh during her degree course in Poland, has since moved to Wales to be with her husband, and is making a name for herself as a visual artist.

Karolina Jones, who is from Piła, in northwestern Poland, attended the Adam Mickiewicz University in Poznań where she studied English Philology with Celtic Studies.  As part of the course, she studied Welsh and became interested in its future.

A year later, she plucked up the courage to speak in Welsh to Kyle Jones, who was visiting Karolina’s university as a guest lecturer.  The pair dated for two years, before Karolina made the move to Wales in 2019, and they got married last year.

After starting to learn Welsh in Poland, Karolina now attends an Intermediate level course with Learn Welsh Swansea Bay Region, which is run by Swansea University on behalf of the National Centre for Learning Welsh.  She also attends an online book club and ‘Sadwrn Siarad’ informal workshops in Tŷ Tawe, Swansea’s Welsh centre.

Over the years, Karolina had often wondered whether she could call Wales her home;

‘‘The struggles the Welsh had experienced in their history and language reminded me of the ones from Poland, and for that reason, I started to feel close to Wales.  As much as I love my family, friends, culture and country, I feel like I am 100% myself in Wales.’’

Karolina recently graduated with an MA in Visual Communication from Swansea’s College of Art, and her graduate project, called ‘The Polkymraes’ (Polk- from Polka – in Polish: Polish woman, -ymraes from Cymraes – in Welsh: Welshwoman), took inspiration from the influences of the Welsh language and culture as well as her Polish heritage.  Karolina’s designs were exhibited at ‘Y Lle Celf’ Open Art Exhibition during the Eisteddfod AmGen 2021.

Karolina adds: ‘‘It was my linguistic and artistic dream to have my art exhibited at the National Eisteddfod and at first I couldn’t believe it when I heard the news.  I love the fact that I can speak Welsh and use the language and culture in my creative practice.’’

Over the last few years, Karolina has enjoyed gaining confidence to use the language, whether writing, reading or speaking Welsh.  Despite initially having reservations about learning Welsh online, she has been pleasantly surprised;

‘‘I enjoy learning in a virtual classroom, because I can turn on my laptop and start the class.  I don’t have to plan any commuting which saves me a lot of time.  I was worried I wouldn’t be able to understand anyone, because of varied accents and microphones other learners have, but I was surprised and pleased I can understand everyone.’’

Since moving to Wales, Karolina says she has been welcomed with open arms, and she would encourage others to learn Welsh;

‘‘I love being able to speak to my husband and his family in Welsh.  Speaking Welsh has given me an additional place in the world outside of my country.  When I talk to someone in Welsh, I feel I am making a new friend.  Learning a language requires commitment, but it isn’t impossible.  Don’t compare yourself to others, find your rhythm and keep Welsh alive in your mind as much as possible.’’