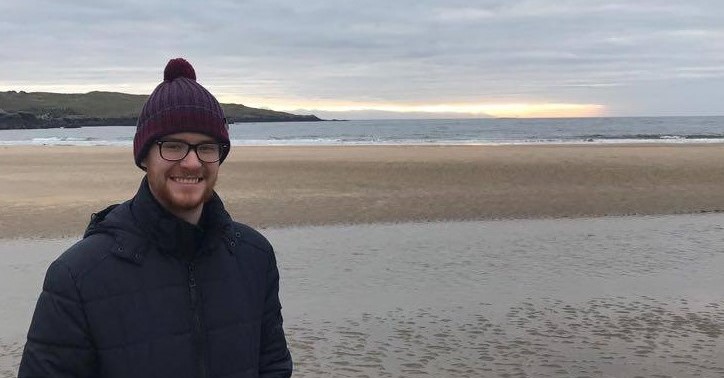 Learn more about Philip Mac a’ Ghoill, an Irishman who has learnt Welsh in less than a year, and who would like to introduce a scheme similar to the National Centre’s ‘Siarad’ – which matches Welsh speakers and learners, in Ireland.

Where do you come from and what is your background?

I am originally from Ard an Rátha, which is a small village in north west Ireland.  My sisters and I were brought up on a farm and English was the language of the home.  I went to study Irish at Dublin University in 2013, and completed my doctorate last year.  I now teach Irish classes in Dublin and in Maigh Nuad.

Why have you decided to learn Welsh?

I heard the Welsh language for the first time at a Celtic language conference in Edinburgh University in 2019. At that time, I could speak Irish and Scottish Gaelic, but not a word of Welsh.  I started to learn the language, using books and apps, before I decided to embark on a course taught in a virtual classroom with Learn Welsh Swansea, which is run by Swansea University on behalf of the The National Centre for Learning Welsh.

Are there similarities between Welsh and Irish?

How much Irish do you speak every day?

I speak Irish with my students and my colleagues at work every day.  On the other hand, I speak English with my family and friends back home in the flat.  I would love to use the language more frequently.

What do you enjoy most about learning Welsh?

It has been very interesting to find things which the Welsh language and the Irish language have in common.  During lockdown, online classes have given me a wonderful opportunity to meet people and socialise in Welsh, even though I don’t live in Wales!

Do you have any opportunities to use your Welsh apart from in your virtual classes?

I have enrolled on the ‘Siarad’ programme, which matches Welsh learners and speakers, with the aim of increasing learners’ confidence.  I meet my partner on Zoom for an hour every week, to chat about all sorts of subjects.  I hope that I will be able to use my Welsh in the work place in future - either by teaching Welsh in classes in Ireland, or by teaching Irish in classes in Wales - who knows?!

Make sure you practise Welsh every day, and enjoy the process of learning Welsh.  It’s very easy to forget a language if you don’t use it very often.

Do you intend to continue to learn Welsh?

I would like to follow an intensive Welsh course as well as learn more about the history of the language.  I want to go on holiday to Wales when I can, in order to practise my Welsh and to hear it being spoken in the community.

Do you hope to introduce a similar scheme to ‘Siarad’ in Ireland?

I would like to see a scheme similar to ‘Siarad’ introduced in Ireland.  I am currently working with Dublin University and other higher education institutions to do something similar here.  The name of the scheme will be ‘Cainteach’ which means ‘talkative’ in English, and I hope it will be just as successful as ‘Siarad’ by the National Centre for Learning Welsh - time will tell!

Picture: Philip Mac’ a’ Ghoill at An Fhearthainn beach in north west Ireland.